Weather observatory Milesovka with meteorological screen placed in the window in the first floor.

Meteorological measurements and observations have been performed in Milešovka continuously since 1905 (with a short break in 1917 and during World War II). Milešovka is the oldest mountain observatory in the Czech Republic. The original measuring instruments are currently on display in the museum directly at the observatory.

In August 1997, the observatory was equipped with an automatic weather station from Vaisala. It is used to measure temperature and relative humidity, air pressure, ground visibility, wind speed and direction, soil temperature at depths of 5, 10, 20, 50 and 100 cm, precipitation totals, duration of sunshine and cloud base height. Observers also determine the amount of clouds, types and nature of clouds, weather conditions, snow depth and other basic meteorological characteristics. 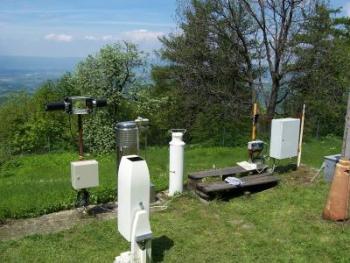 Since 1998, research at the Milešovka Observatory has specialized in the chemistry and physical properties of deposited precipitation. From spring to autumn, water samples from low clouds (or fog) were taken. The samples were then further chemically analyzed. Using several modern instruments (mostly optical), the basic physical characteristics of low clouds (or fog) were also measured, such as liquid water content, droplet size spectrum, icing weight, etc.

Since 2007, the observatory has been operating an experimental optical link with a length of 60 meters between the top of the tower and the garden. At the same time, the speed and direction of flow are measured using two 3D sonic anemometers near the transmitter and receiver of the link and the visibility is measured on the observatory tower. The purpose is to study the effect of visibility and wind turbulence on the quality of the optical link.

In 2015, the PWD21 station instrument for visibility measurement was replaced by a newer type PWD52, which provides more accurate and detailed data on visibility and the type and amount of hydrometeors in the event of precipitation. In 2018, a new ceilometer CL51 from Vaisala was added, a device measuring the height of the boundary layer and cloud base above the station.

Since 2018, several state-of-the-art instruments have been installed at the observatory to measure cloud processes and processes leading to lightning. The first instrument was the KaBand METEK cloud profiler, which detects the detailed distribution of cloud drops and crystals in a vertical profile above the station. The second instrument was the SEVAN detector, which measures incident cosmic rays that are thought to help create a lightning channel. Another set of instruments was a detector of changes in the electric field of the atmosphere and a detector of a magnetic field. Both measured quantities are caused by storms passing around the observatory. The last instrument was the X Band FURUNO radar, which measures the three-dimensional field of precipitation around the observatory. This radar was installed on top of the tower in October 2020. X Band FURUNO radar at the top of observatory tower