Former coal mine Ležáky has been restored by the hydric recultivation and the result of this restoration is the origination of new artificial lake Most. New surface has different thermal properties (heat capacity, thermal conductivity), roughness and albedo compared with the original surface. These changes influence the atmosphere and affect the local temperature, humidity and other meteorological elements. The aim of the meteorological part of the study is to quantify these influences. Together with statistical analysis of historical and newly measured data, numerical weather prediction model (NWP) COSMO is used.

We have available measurements from five meteorological stations:

For model analysis we use also data from the objective analysis of the European Centre for Middle Range Weather Forecasting (ECMWF).

We made statistical comparison of two periods: 1998 – 2000 – that means the period when the lake hasn´t been flooded yet, and 2009 – 2011 – the period after lake flooding. The second period is the period when the atmosphere, as we suppose, could already have been affected by the lake. The results show that the air humidity has increased in the second period and that air temperature in 2 m at 7, 14 and 21 UTC has decreased. To analyse the impact of the lake on precipitation we used the statistical methods principal component analysis and Mann-Whitney-Wicoxon test. The results don´t show any significant impact of the lake on precipitation amount.

In the second part of analysis we used numerical weather prediction model COSMO to simulate the affect of lake Most on air temperature. First step was to find right parameters of the model with 333 m horizontal resolution. We determined right boundary conditions, turbulence scheme and the model field size. We made a number of model integrations and their analyses for warm and cold part of the year, for different lake sizes, for snow conditions and for real data and orography.

Figure 1.: Mean values of lake influence at the elevation of 0.2 m above the surface for four lake lengths equalled 8, 4, 3 and 2 grid points and indicated by L8, L4, L3 and L2, respectively. The left coast of the lake was at x=69. Mean values were calculated over the warm period (left column) and cold (right column) in dependence on D (delta). 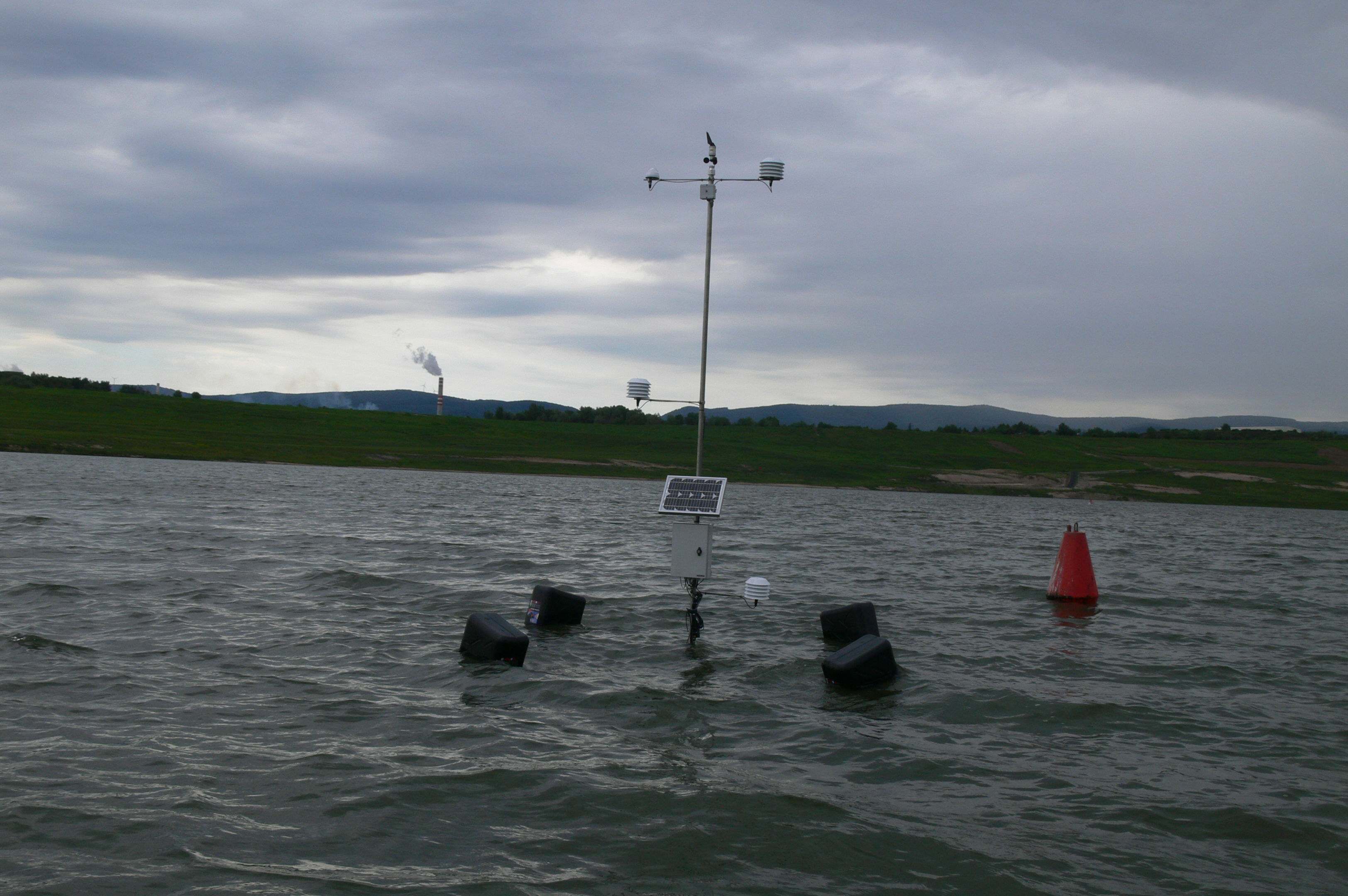 Software ALAKE was developed as a tool for estimating the influence of a water area (lake) on the air temperature. The impetuses for its development were hydric reclamations of the brown coal mines in the northern Bohemia. Hydric reclamations are processes of flooding the mineshafts after finishing mining activities. This way of regenerating the destroyed country after coal mining and is recently used and it is planned to be used in the future. The origination of a new water area changes thermal characteristics of the surface including albedo and surface roughness which leads to the changes in the atmosphere.

The ALAKE model was developed using data concerning flooding of Ležáky open mine and the formation of Most lake. For this area data from the Kopisty meteorological observatory located approximately 1 km from the lake bank and data from a lake station measuring the water temperature were utilized.

We used the non-hydrostatic numerical model COSMO to simulate the impact of the water area on the air temperature. The model was applied with a horizontal resolution of 333 m and with 70 unequally distributed vertical levels. We supposed a flat terrain and geographical parameters like surface roughness, soil type and vegetation we set to constant values prevailing in the studied area. In addition we supposed that the lake has a rectangle shape.

We performed hundreds of model integrations for various initial conditions. We supposed that initial conditions that were calculated using meteorological observations at the Kopisty station and vertical profiles obtained from ECMWF analysis, corresponded to the equilibrium state between the ground surface and the atmosphere. When the model started integration with the included lake, the equilibrium was disrupted. During the integration, the structure of the boundary layer was modified, and the imbalances were gradually dropped. The model integration continued until a new approximate equilibrium was reached, and the result ant state was considered to be caused by the existence of the lake. To approach the equilibrium state, the radiation parameterization was switched off in the model to remove diurnal variati on and the Coriolis force was also switched off to ensure that the initial conditions were consistent with the physical model. The effects of the lake were calculated as the differences between the state of the atmosphere upstream from the lake and the state after the integration. Tests showed that the approximate equilibrium was reached after 3 or 4 hours of integration.

The ALAKE model is a simple physical model with empirical parameters whose values were determined so that the outputs of the ALAKE and COSMO models were similar. The outputs of COSMO were treated as the true values. ALAKE approximates the relationships between a predictand, which is the change in temperature at a given location caused by the creation of the lake and calculated by the COSMO model, and predictors, which are the parameters of the lake and selected variables describing the current weather situation.

The ALAKE software estimates the changes in 2m temperature evoked by the lake existence. There are 6 input parameters: width of the lake, lake water temperature, surface temperature, air temperature and relative humidity at 2 m and wind speed at 10 m above the ground.

The ALAKE software has been developed in two versions – ALAKE 1D and ALAKE 2D. The input data of ALAKE 2D are supplemented by the wind direction and the output of this version show the areal estimation of the influence of lake existence on air temperature.

The MCR library for Matlab R2013a (8.1) has to be downloaded and instaled for ALAKE model running.